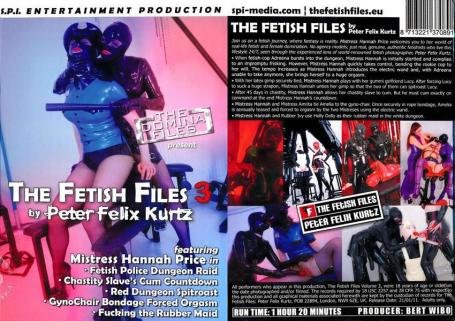 Description:
Join us on a fetish journey, where fantasy is reality. Mistress Hannah Price welcomes you to her world of real-life fetish and female domination. No agency models; just real, genuine, authentic fetishists who live this lifestyle 24/7, seen through the experienced lens of world-renowned fetish photographer Peter Felix-Kurtz.

Scene One: When fetish-cop Adreena bursts into the dungeon, Mistress Hannah is initially startled and complies with an impromptu frisking. However, Mistress Hannah takes control, bending the rookie cop to her will. The tempo increases as Mistress Hannah introduces the electric wand and, with Adreena unable to take anymore, she brings herself to a huge orgasm.

Scene Three: With her latex gimp securely tied, Mistress Hannah plays with her gummi girlfriend Lucy. After making Lucy suck a huge strap-on, Mistress Hannah unties her gimp so that the two of them can spit-roast Lucy.

Scene Four: Mistress Hannah and Mistress Amrita tie Amelia to the gyno chair. Once securely in rope bondage, Amelia is sensually teased and made to orgasm by the two Mistresses using the electric wand.

Scene Five: Mistress Hannah and Rubber Ivy use Holly Dolly as their rubber maid in the white dungeon.

If you don’t have limitations financially and/or regionally, support the content makers and providers!